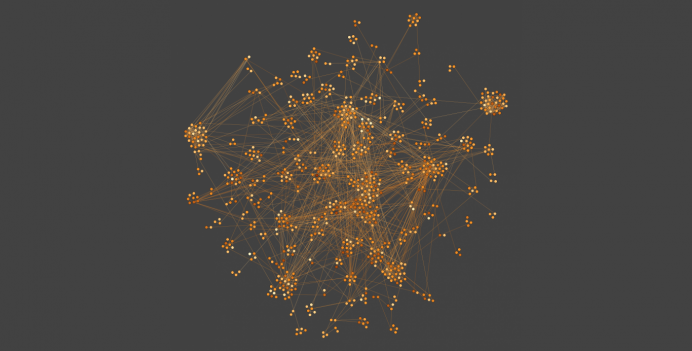 Current scientific and social endeavors are generating data that can be modeled as graphs: high-throughput biological experiments, screening of chemical compounds, social networks, ecological networks and food-webs, database schemas and ontologies. Most current research concentrates on problems where the graph structure is inherently static. But networks in the real world are dynamic with a wide range of temporal changes: while the topology of networks such as social networks and transportation networks undergoes gradual change (or evolution), the content (information flow, annotations) changes more rapidly. Mining and analysis of these annotated and dynamic graphs is crucial for advancing the state of scientific research, accurate modeling and analysis, and engineering of new systems. Our goal is to develop a set of machine learning, analysis, and modeling methods for such networks.

Predicting network structure and flows on edges is a precondition to effective planning and disaster response in critical infrastructure networks. Accordingly, we propose to develop algorithms inspired by network science, physical modeling, and machine learning to determine this information from incomplete observations. Using both physical domain-specific and data-driven approaches, these algorithms will address diverse problems including: the reconstruction of network topology and parameters, the estimation of network flows, the optimal selection and scheduling of multiple types of sensors, and the modeling of interdependencies in multilayer networks. Together these methods will develop a rigorous theory for solving the inverse problem of edge and flow determination from observations of critical infrastructure networks.

Our research on social networks examines the relationship between information content, network structure, and user behavior. We focus on the additional information/attributes beyond just the structure. We also consider network-wide metrics that can compare network states with polar sentiments based on models of opinion dynamics. We are investigating distance metrics that preserve quality and that at the same can be computed efficiently.

Recent convergence of research in social and psychological sciences, dynamic and quantitative modeling, and network science has led to a re-examination of collective team behavior from a quantitative and systems-oriented viewpoint. Teams cannot be understood fully by studying their components (members) in isolation: team performance is not simply a sum of individual performances; and a diversity of opinions among members leads to better group outcomes. However, it is not yet understood how patterns of interactions and relationships among team members impact performance. Specific questions we are exploring include: What is the effect of structural balance on the performance of teams? How to model the dynamics of risky decision making in teams on intellective and non-intellective tasks? How to model and design mixed teams with humans and AI agents?

Network science is a new and emerging scientific discipline that examines the interconnections among diverse physical or engineered networks, information networks, biological networks, cognitive and semantic networks, and social networks. This field of science seeks to discover common principles, algorithms and tools that govern network behavior. The National Research Council defines Network Science as "the study of network representations of physical, biological, and social phenomena leading to predictive models of these phenomena." We are developing methodologies, algorithms, and implementations needed for scalable, dynamic, and resilient networks. Specific problems include querying composite networks, modeling dynamic networks, sentiment analysis, analysis of content and user behavior, discovering unusual patterns, and sampling in composite networks. Compared to high dimensional data, analysis of network data is more challenging due to interdependencies between entities, the presence of attributes, and the natural evolution of networks over time.

Intensive investigations over several decades have revealed the functions of many individual genes, proteins, and pathways. There has been an explosion of data of widely diverse types, arising from genome-wide characterization of transcriptional profiles, protein-protein interactions, genomic structure, genetic phenotype, gene interactions, gene expression, and proteomics. We are developing techniques that can integrate and analyze data from multiple sources efficiently. Research in systems biology has shown that clinical outcomes, such as susceptibility to cancer, depend not only on the expression level of a single protein, but on pathways or network modules. This can be modeled using a network with dynamic node labels and a global dynamic state; the node labels indicate the protein expression levels of an individual and the global state indicates the presence or absence of the disease. To predict the biological outcome or to categorize an individual, we need to find the sub-networks whose local states accurately predict the global network state. Learning discriminative subgraphs is key to understanding the complex relationship that exists between the local and the global states. Furthermore, they provide the platform for higher-order modeling tasks such as network regularization, classification, and regression. These efforts on biological network analysis are being augmented by a unique distributed digital library of bio-molecular image data. Such searchable databases will make it possible to optimally understand and interpret the data, leading to a more complete and integrated understanding of cellular structure, function, and regulation.

Network-based modeling and characterization of brain architectures has provided both a framework for integrating multi-modal imaging data as well as for understanding the function and dynamics of the brain and its subunits. Brain networks are traditionally constructed either from structural or functional imaging data. Structural brain networks represent properties of physical neuronal bundles using methods such as diffusion MRI. Functional brain networks represent the functional associations between regions estimated by statistical similarities in regional time series, including correlation or coherence. Global network analysis of both functional and structural connectivity has demonstrated that brain networks have characteristic topological properties, including dense modular structures and efficient long-distance paths. We are using local geometrical and topological properties in order to identify subgraphs that discriminate between groups of individuals, and to understand how structural and functional networks are coupled.

Increased availability of large repositories of chemical compounds and other biochemical data has created new challenges and opportunities for data-mining in chemical informatics and drug discovery: identification of active substructures and compounds, prediction of physicochemical properties and structure-activity relationships, diversity analysis of compound collections, drug repurposing, and pathway mining for identification of network fragments responsible for disease progression. We have developed several graph-based and 3D-based methods for such analyses.